Trying it a different way....

I have been really ill over the last week or so - the victim of a really vicious bug which has left my creative juices somewhat depleted...

However I did manage to start work on the final two stories for the Spooky Stories collection-
One Legged Steve  and Show and Tell....

Most of the last week has been spent distancing myself from the other contributors in the Zombelina project, more details can be found on http://zombelina.blogspot.com/ .

However with every crazy cloud, there is always a silver lining and in this case it is coming in the form of an audio book....so the initial format for Spooky Tales will now be narrated by actor Steve Garry and will become available for download in the very near future...a hard copy of the audio will be available from the HPM Website and eventually through our other suppliers - including I-Tunes et al.

Because of production costs the publication of the book has had to be put back until next year - which is a shame in a way but makes more sense.

In addition to the Audio Book, a collaboration with Static Island will see chillout remixes of each of the stories - and be released individually as the months go by....a demo version of Zombelina can already be sampled at http://www.youtube.com/watch?v=Rdw7kRRUOt8  and on the Zombelina website....


It's that time of year again when those delightful Himalayan Balsam plants adorn the pathways, and waterways of the English countryside and envelop everything in their way - and with each year their numbers increase until eventually there will be nothing left but "Balsam".

Naturally this has caused alarm throughout DEFRA and beyond, and each year well meaning folk head out into the woodlands and parks with the sole aim of "Bashing the Balsam" - Unfortunately, their efforts are not having very much effect and serve only as a slight inconvenience to the Himalayan Balsam.

However, as more and more people are daring to venture out at this time of year, intent on capitalising on the bountiful harvest of fruit and berries that are just coming into season, it seems only fair to let them know that an even greater harvest can be had from the public enemy of plants.

I did try spreading the word last year but without the aid of images, my message fell on deaf ears - this year however I am proud to bring you:

First put your coat on and head off out to track down some Balsam, I have included an image to aid identification, but to further assist you, look for the tall plant with white or pink delicate flowers. At this time of year they should be on the wane and be replaced with seed pods which are shaped like tiny okra.  The Himalayan Balsam is easily identifiable, because when you touch a ripe seed pod it explodes "Alien style" and throws out the seeds in every direction.  ( this is one of the main reasons that "Balsam Bashing doesn't work").  The stem of the plant is a hollow and translucent and a quick inspection of the roots should show about twenty reddish roots just above ground that anchor the beast in place.

So when you are satisfied that you have the Himalayan Balsam in your sights, it is now time to harvest the seeds.

1.  Very carefully tilt the flower head towards you and without touching the pods place a large plastic bag over the top of the plant.  Once you are confident that the seed heads are inside the bag, tickle the pods and let them explode, ( be on the lookout for bees collecting the last bits of pollen).  The seeds will collect in the bag and each plant should give your about 100 seeds.

2.  Carry this action on until you think you have enough seeds.....how much is enough seeds?...erm  well I      don't know, but bear in mind that the pod husks are also collected and will need to be removed at a later stage so.... the more you collect the more you have to sort out later.....simples.

Your harvest should look similar to the image above with the seeds ranging from white to brown to black, being mixed together with the curled up green pod husks and occasional flowers.
Now comes the boring bit...the seeds need to be separated, and up to now the only way I have found to do this is to spread them out on a tray and pick out the pods, flowers and anything else that may have found its way into the bag.  I wont kid you....this will take a bit of time, but eventually you should be left with a tray full of seeds.
Place the seeds in a bowl of fresh water for twenty minutes to wash off any dust and creepy crawlies that still may be hiding amongst them and drain the water away through a sieve.

Empty the seeds into a dry frying pan and on a low heat slowly cook them until the seeds turn a similar shade of grey.

Et voila your Himalayan Balsam Seeds are now ready for eating..... or.  you could do what I did and add them to a cookie mix 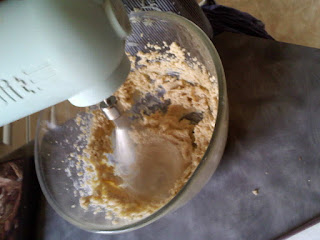 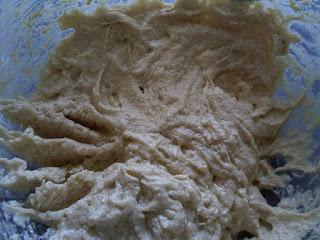 Cream 125g of unsalted butter with 125g of sugar, slowly add 2 beaten eggs to the mix and a teaspoon of vanila essence.  Fold in 250g of self raising flour and 200g of Himalayan Balsam seeds together with a 200g  mix of  of toasted almonds, pumpkin and sunflower seeds. 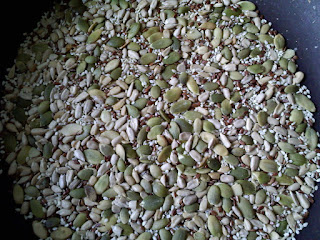 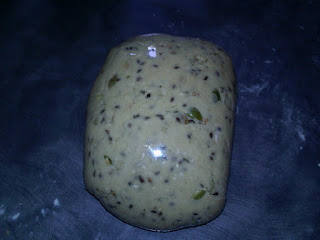 Gather the mixture together with your hand and shape the dough into a ball.  Wrap in clingfilm and leave to settle in the fridge for half an hour.

When the dough has chilled, remove from the fridge and dive into 26 pieces, rolling each one into a small ball and placing on a greased baking tray. 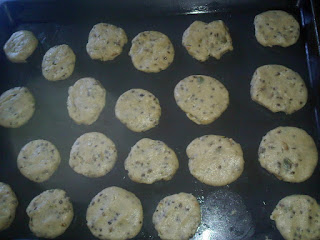 Lightly flatten each cookie before baking at 180C (160C fan oven) Gas Mark 4 for 10-12 minutes until golden but still fairly soft.  Leave on the baking tray for 5 minutes before transfering onto a wire rack to cool. 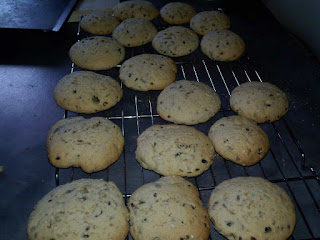 And put the kettle on.

Congratulations, you have probably taken the best step to keep the spread of Himalayan Balsam in check and at the same time made yourself and the kids a damn fine cookie.  Now with a plate full of cookies and a glass of milk sit down in your favourite chair, open The Hairy Plug Monster and start reading.....if you haven't got a copy please visit http://www.hairyplugmonster.com/
Posted by Leighroy Marsh at 9/06/2010 1 comment:

Regardless of where I was placed right on the bill, it was still quite an honour to be asked to take part in the first Just So Festival, in the woods of Barnswood - just outside Leek.   It was advertised as " A Glastonbury for Kids" and certainly didn't disappoint.

Advertised as "  a boutique, weekend-long festival of creativity aimed at children, young people and their families.
The festival will provide a magical experience where art, music and literature are embedded and entwined in a beautiful and wondrous landscape.

The day started well with a random text sent to Jo Goode on BBC 6 Music turning into a full scale live interview on the air, giving me the chance to mention the book and 'big up' the festival.

My reading went well, and even though I was bottom of the bill on Saturday morning - I still managed to pull in quite a crowd and sell a few books in the meantime.  After my stint - we spent the rest of the day walking watching the many different acts performing in the many different glades.

I have to admit that I did feel quite lost without my own kids there, and decided to stop as many random families as I could and read my stories to them...( oddly enough it went down rather well).  There was so much going on - it is really hard to choose a favourite moment although I had to watch in admiration at the two 70+ dancers who were throwing each other around the scout hall to the strains of Glenn Miller.

The photos are on my mums camera, ( who is in Italy again - for a change and I wont be able to post them until her return).  Although the festival went on for the weekend, we only stayed for the Saturday, due partly to my nephews feeling the pace and me not really being made of camping fibre, in truth though The Just So Festival should be sampled as a three day event,  as the entertainment goes on right through the night, next year I am going to be more prepared and take the girls camping.  ( hmm...that could be an empty promise though).

If anyone is thinking about booking for next year, my advice is "Get a move on", as the tickets went on sale for Just So Festival 2011 the following Monday, and are already selling like hot cakes..