Some sneaky peaks at Be Careful Ethel

The week seems to have melted into an endless session at the computer as I try to configure Kim's images into book format.  My experience with In Design CS4 has now evolved to such an extent that, not only can I alter the font.......
I can now create circles and fill them with colour ......  ( dah-dah).
The trick of course is knowing which colour to fill them with. 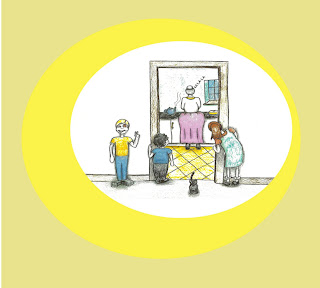 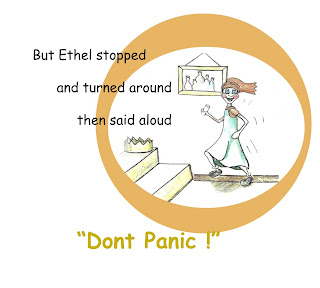 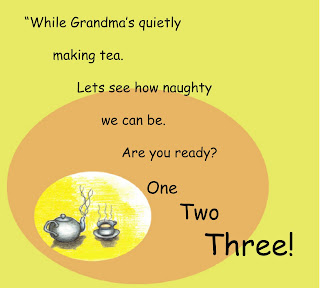 It seems that to be an independent children’s author and publisher in today’s market – it’s not enough just to write good stories. That has proven to be the easy bit.


When we published The Hairy Plug Monster 18 months ago, we naively thought that it wouldn’t be long before the whole world knows who we are along with commercial endorsements right across the board from branded doughnuts to Theme Park rides….

Imagine that! “Dare you ride The Plugmonster?”

Anyway as this blog has detailed in full – that really hasn’t been the case. Ten years ago we may have stood a chance, but not today.

10 years ago, all we had to do was publish a book or better still get someone else to publish it and live off the earnings. Now the game has changed completely. Just having a book isn’t enough – it now needs to be digitalised and produced in formats that can be delivered to a variety of gadgets.

Because I don't have the luxury that newly crowned children's laurette - Julia Donaldson has by not allowing her books to be sold in this format, I have reassessed my outlook and decided that e-books really are a major part of the future and as a publisher and author it would be a wasted opportunity not to at least have a go.

Not being a total “geek” myself, I have had a few problems getting to grips with the software, slowly overcoming it with a few choice swear words and long periods of self doubt........

It seems to be working.

In one way it seems a 'no brainer' as we are already producing PDF’s to send to the printers for the first edition print run. So, by default we have an e-book in it’s most basic form.

Although a PDF may seem a bit static and not very engaging, it does serve as a useful starting point into the world of E-pub.

At the last count there were over 30 hidden ‘hotspots’ in the PDF.

Although it is an original thought for us, everyone else has been doing it for some time, so even at this early stage in E-volution, we are still in the caves.

The publishing software I am using has already been superseded by an even better one, that allows e-publication in several formats and apparently lets you integrate animation, movies and other tasty bit of software to make the e-book a full 360 interactive experience. (well that’s what it says on the tin).

If you get a chance, have a look at Alice on the I-pad - which seems to have set the standard thgat we all must follow.
Already it is possible to submit the Italian text into The HPM and with some help we can even do the Farsi version that we have had for ages. Now that offering direct translations is a real possibility, I will be calling favours in from all over the World to get translations in as many languages as possible and putting them up on www.hpmmedialtd.com .

One of the challenges at the moment is getting the HPM into a format that is supported by Amazon and Waterstones - The E-pub format isn’t picture book friendly and although there is a way to do it, it involves getting someone else in and paying them far too much money.

Obviously an e-book wont be the same as having a real children's picture book to snuggle up and read to your kids, but it seems that within a few years the I-Pad, Tablet and Smart Phone are going to become part of the furniture in most households.

It is also true that you can download a book for less than it would cost to park your car in town... (well where I live anyway), and it seems inevitable that this market is only going to grow bigger each year, and while other people may have more technologically savvy ebooks,

HPM Media have brilliant stories.
Posted by Leighroy Marsh at 6/08/2011 No comments: