As I mentioned in an earlier post, Steve Ancliffe who runs Popblastworld  click here asked me to write material for a new project he is working on.  Below are the lyrics to The River, one of the first songs I wrote for him.


The animals were on their way to see the summer fair,

There was cats and dogs and rabbits, weasels, stoats and goats and hare.

But they came across a river and the bridge just wasn’t there,

And they wondered how they’d ever get across to that fair.

And nobody knew how they would get to the other side.

So they put their heads together, to come up with a plan,

And the cats and dogs decided that they would try and build a damn.

So they gathered up some branches and the cats all did the same,

But when they threw them in the dogs all thought it was a game.

And when the animals - put all the sticks into a stack,

The dogs all wagged their tales - and then they brought the branches back.

That "we’ve got to cross the river and it’s looking really big.

I don’t know if we can ever get across to that side".

And nobody knew how to swim – especially the sheep.

They put their heads together – and went and asked the goat,

And soon they decided - they should try and build a boat,

They didn’t have the nails so they could build it like they should.

Then the fox put up his paw and said that a great idea,

How they could cross the river – to see the summer fair.

He volunteered to take the animals upon his back,

He could swim across the river and – swim right back.

But the animals decided that they didn’t like his plan,

Remembering the story of the 'Gingerbread Man'.

And the river was wide and the current was strong,

Then the wise old owl had the best idea yet,

To see the summer fair without ever getting wet.

"Every body’s here and we should be over there,
.
We don’t have to cross the river to see the summer fair.

There isn’t any reason why we have to shed a tear,

I think it would be best if we just have the party here.

The river’s too wide and the banks are too steep

The river’s too cold and the current too strong

Moving in yet another direction.... 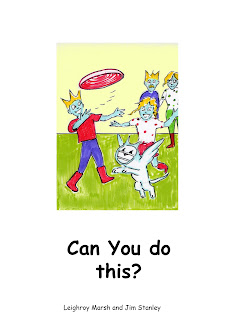 Last July, Kath Conwell the headteacher at Adswood Primary asked me to come in and meet her, as she had something that she wanted to discuss.  Well that's not strictly true, I actually rang her about visiting the school to perform a reading so I could be assessed by Siobhan from the Windows Project - but that's another story.

Anyway to give you a a little bit of background information, Adswood Primary School  is in a 'seriously underprivileged area of the borough and when Kath took over the school about 5 years ago - it was classed as a 'struggling school' with low levels of child literacy. 5 years down the line every child is a reader and the energy and enthusiasm for learning, displayed by the teachers, parents and pupils is phenomenal.  As I may have mentioned before, there is no other school quite like it.

During my time as a writer I have visited many schools across the North West and in many cases I have been lucky if the Head Teacher could be bothered to even say 'hello' let alone make an effort to learn my name.  Kath, however immediately struck me as someone who genuinely has the interests of the school at heart, and not where abouts they are on a government league table.  It is soley due to the dedicated efforts of herself and her team that the pupils are achieving great things.

What has this got to do with me? I hear you ask...

Well...Kath has implemented a learning program that incorporates Makaton Sign Language with the learning of the first key words and has given it the catchy title "Sign and Shine".  As this scheme is not officially sanctioned, it is taught alongside the incredibly surreal "Letters and Sounds" which concentrates more on the phonics.  (having seen both my girls grow up using this rubbish and having been a reading recovery assistant myself, albeit for a short while, I believe that on the whole it doesn't work and merely confuses children more than it assists.)

Each year, Henry Winkler a.k.a "Fonzie" awards a bursary to a school which is already working in special needs and requires funding to support their existing outstanding work and as such Kath entered the Sign and Shine program into the competition and should the school be successful then they would use the bursary to produce a range of learning materials for the program.  (this is where I come in)  on the application form she advised that a 'local children's writer' with close links to the school would be asked to produce a range of books so the program could be shared with similar schools throughout the region.  So on the same day that I rang up the school to see about a reading, Kath was informed that her application had made the final shortlist and the winners would be announced at the televised National Teaching Awards in  London on October 30th.

Naturally when Kath asked me if I would like to get involved I jumped at the chance, not just be because of the bursary but because I had seen Sign and Shine in action and knew that it really worked.  Writing a series of worthwhile educational books that could genuinely make a difference would give my own career a bit of credibility.   I thought of the many ways that Sign and Shine could be presented if I was given the opportunity i.e.  Digital Format with video links to actions, audio etc not forgetting the chance to be commissioned to write 12 books (possibly more).


Fast forward 3 months and I found myself on a coach going down to London together with another 15 or so assorted parents and teachers, to join Kath and several other members of staff who were going down on the train.

Before the award ceremony, we went to Bella Italia for some refreshments and half a bottle of wine and a sea bass later, I found myself outside the Palace Theatre in London waiting alongside a thousand or so real teachers all dressed up to our eyeballs.

*********
Unfortunately Adswood Primary didn't win, ( I have deleted an earlier piece I wrote on the award ceremony itself as it seemed too critical of a lot of things that happened that evening.) However, after speaking to Kath the following Monday she seemed adamant that they would secure the funding from somewhere....

The HPM was keen to remind you all about this original recipe for a bonfire toffee that bites back,

That's it - it might not score any brownie points with your dentist - but your kids will love it
Posted by Leighroy Marsh at 11/01/2011 No comments: